Along with the Cambodian curry paste known as kroeung, prahok is the most recognizable component in Khmer cuisine. Every Khmer cook uses this thick, greyish, visually ugly fermented fish paste to give almost every dish in their arsenal of Cambodian cuisine depth of flavour.

As it is either used extremely sparingly or not at all in Cambodian meals that are offered in the majority of tourist restaurants in Siem Reap, most tourists to Cambodia don’t need to be afraid of this strong fermented fish paste known as prahok.

Although this would seem to contradict what I said in the introduction, Cambodian restaurateurs have long understood that serving any Cambodian food to a foreigner with local levels of prahok will not result in a favourable reaction.

In fact, when I asked the famous Siem Reap restaurant’s Cambodian cooks during an interview what they believed would happen if they prepared their meals the same way they did at home, the response was astonishingly simple. They said that “We’d go broke” since they use a lot of the fermented fish paste in their household cuisine.

So why is this fish sauce so crucial to Cambodian Khmer cuisine, which offends the sense of smell?

In the past, prahok, which was consumed mixed with a bowl of rice, was occasionally the only source of protein for the poor rural inhabitants of Cambodia.

Locals start storing fish during the wet season and for a few months later, when fish are plentiful. To produce prahok, the fish is salted (as shown in the top image above), dried, smoked, and fermented.

In this way, during the dry season when water levels are at their lowest and they do not have access to other sources of protein, they can consume the preserved fish in all of its forms.

As a result, the fermented fish paste now serves as both the main protein source and a potent flavour enhancer in the majority of Khmer meals. If there isn’t any fresh fish available to add to the soup, it can serve as both in one of the staple meals of Khmer cuisine, the traditional soup, Samlar kâko or Samlor kako, together with the regular seasonal vegetables and fruit.

One of the reasons why boiling water is typically added to some of the fermented fish paste before utilizing the resulting “prahok water” is due in part to the tiny fish bones. The prahok sach is frequently coarsely chopped and added to dishes or used as a component of a dip that is consumed with fresh vegetables.

I’ll be sharing a recipe for the dish prahok ktis (or, more accurately, prahok k’tis), in which the fermented fish paste truly shines—in a nice way—in the upcoming article. It provides a chance to talk about its connection to pla raa, a type of fermented fish popular in Thailand. 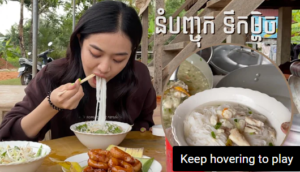